Northern Gorkha, Nepal, is home to the Himalayan Buddhist pilgrimage valley known as Tsum Valley Trek. It is one of the remotest valleys in all of Nepal. The entire area has a definite Tibetan Buddhist vibe to it and is quite different from the surrounding farmland. It is located in the Manaslu region, high up near the Tibetan border. The Tsum Valley Trek leads tourists to the secret valley of Tsum, which means "vibrant," and is home to the Tsumbas, a direct descendent of the Tibetan people. In 2008, this remote, secluded Shangri-La only recently opened to hikers. You will walk for 5-8 hours each day, with the highest point of the journey being 4,000 meters above Mu Gompa, the biggest monastery in the valley.

Our personnel will be waiting to greet you when you land at Kathmandu's Tribhuvan International Airport and take you to your hotel.
We'll provide you and your Guide a briefing on the program by this evening.

You will begin your tour with a beautiful drive to Arughat after an early-morning breakfast, then continue on to Soti Khola. The bus will go along the Trishuli river's banks as it follows the Prithivi Highway west of Kathmandu. The bus will travel from Dhading Bensi to Arughat Bazaar while traveling along the Budhi Gandaki river, offering breathtaking views of Mt. Manaslu and Ganesh Himal along the way. You may reach Soti Khola by road in about two hours from Arughat.
Meal: Breakfast

We will climb across the suspension bridge in Soti Khola after having our breakfast. The trail passes through a sal woodland, and as we arrive at Moraine, we can view the raging Budi Gandaki River. Khursane will be reached after more walking. We will descend to Mache Khola, where we will spend the night, by traveling along rocky routes and passing by many waterfalls, cliffs, and land terraces.
Meal: Breakfast, Lunch, and Dinner

You cross the Machha Khola today and move upstream along the bank of the river. The trail continues through the wooded area toward Dovan after crossing Tatopani. You see views of Ganesh Himal (7,429 m) and Himalchuli as you continue forward (7,893 m). You ascend and cross a second suspension bridge to reach Thado Bharyang after crossing the bridge across Dovan Khola. The route then continues alongside the Budi Gandaki River before gaining altitude to reach Jagat. Stay the night in Jagat.
Meal: Breakfast, Lunch, and Dinner

Once the ACAP procedure is over, we ascend to Salleri along a rough slope before descending to Sirdibas. As the trail ascends to Ghatta Khola, the valley gradually becomes more expansive. Continue upstream to a lengthy, straightforward hanging bridge. To reach Philim, a sizable Gurung settlement, ascend. The school and police station in Philim Valley were made by Japan. We approach Lokpa by walking up north from Gum Pul after passing Philim to the north through a forest with views of the valley's enlarging. Spend the night at Lokpa.
Meal: Breakfast, Lunch, and Dinner

Although the true entrance to Tsum Valley starts from a deep, thin, and tight ravine leading to Lokpa, the day begins with a hike from the village of Lokpa along the path to Tsum Valley. You will have breathtaking views of Ganesh Himal (6,672m) and Boudha Himal from the trail. The path then descends to the valley of the Lungwa River and continues through a thick stand of juniper, pine, and rhododendron trees. You will next arrive at Gumling and shortly thereafter at Syar Khola, indicating that you have reached the village of Chumling.
Meal: Breakfast, Lunch, and Dinner

We'll enter the upper valley today. The trail follows the Syar River as it flows from Domje down to Tsum Valley and then ascends. Gomba resides in Gho, a charming village in the valley. For Chhokangparo, we'll hike upward. On clear days, magnificent vistas of Hiuchuli and Ganesh Himal might be observed. The night will be spent in Chhokangparo.
Meal: Breakfast, Lunch, and Dinner

We walk through the Ngakyu settlements. Today, Lama Gaun, Leru. We are going to a cave to mourn him. It is thought that saint Milarepa meditated in this cave (entrance to the cave cost NPR 300/U$3). The cave is sometimes referred to as "Pigeon cave" or Piren Phu. As we travel to Chhule and the Nile, we pass the villages of Burji, Phurbe, and Pangdun. On the route, we can see some amazing, enormous Buddhist stupas. Spend the night in the Nile.
Meal: Breakfast, Lunch, and Dinner

You will leave Nile Village after an early-morning meal and travel along a trail that gradually climbs to Mu Gompa, the largest monastery in this area. But after a 2-hour hike from Nile Village, you will first arrive at Dephyudonma Gumba (monastery), one of the oldest in the area and a symbol of the beginning of the Buddist faith in this valley.
Meal: Breakfast, Lunch, and Dinner

Today, the distance from Nile to Chhekamparo is short. We hike through Lar Village, stop at the Rachen Gompa, also known as the Nunnery Gompa, cross a suspension bridge, and then hike back to Chhekamparo along the same route. Sleep there the night before
Meal: Breakfast, Lunch, and Dinner

On a path to Chumling, the journey leads to Chhokangparo in the south. You will notice a tiny white Gompa at Gho within two hours of starting the trek (2,485m). You will descend on a route from this monastery to eventually reach a wooden bridge over Siyar Khola. You will arrive in Domje, which has a clinic for Tibetan herbal medicine and a school, after crossing this bridge. Reaching Lungdang Gompa requires one more ascent via the silver pine forest.
Meal: Breakfast, Lunch, and Dinner

Today, after eating at Lokpa, we make our way to Jagat on foot. The trail descends to Ghumpul through a forest of pine and rhododendrons before rejoining the main Manaslu trail once more. We continue walking past Eklai Bhatti, Philim, and the Buddhi Gandaki before arriving at Sirdibas and finally reaching Jagat. Overnight sleep in Jagat.
Meal: Breakfast, Lunch, and Dinner

After around 15 minutes of walking, the trail descends to Bagar from Jagat. There, it crosses a suspension bridge and a cantilever bridge that was constructed in the wake of the devastating Nepal earthquake that damaged the famed Manaslu trekking track. Continue the journey through Dovan, Tatopani (a hot spring), Khorlabesi, and Lapubesi, where we spend the night.
Meal: Breakfast, Lunch, and Dinner

Day 15: Drive back to Kathmandu

You drive back to Kathmandu from Soti Khola. You spend the majority of the day traveling, so when you get to Kathmandu, you may head straight to your hotel rooms and rest. If you have the time, you can learn about the city's Newar heritages and sample their local food. Hotel accommodation for the night in Kathmandu.

Please kindly talk with the trekking company once to determine the best equipment for your intended trip.

The given cost are per person and exclude international flights. Given below are the departure dates available for online booking. If the given date is not favorable then please contact us and we will happily customize your trip on dates more appropriate for you. 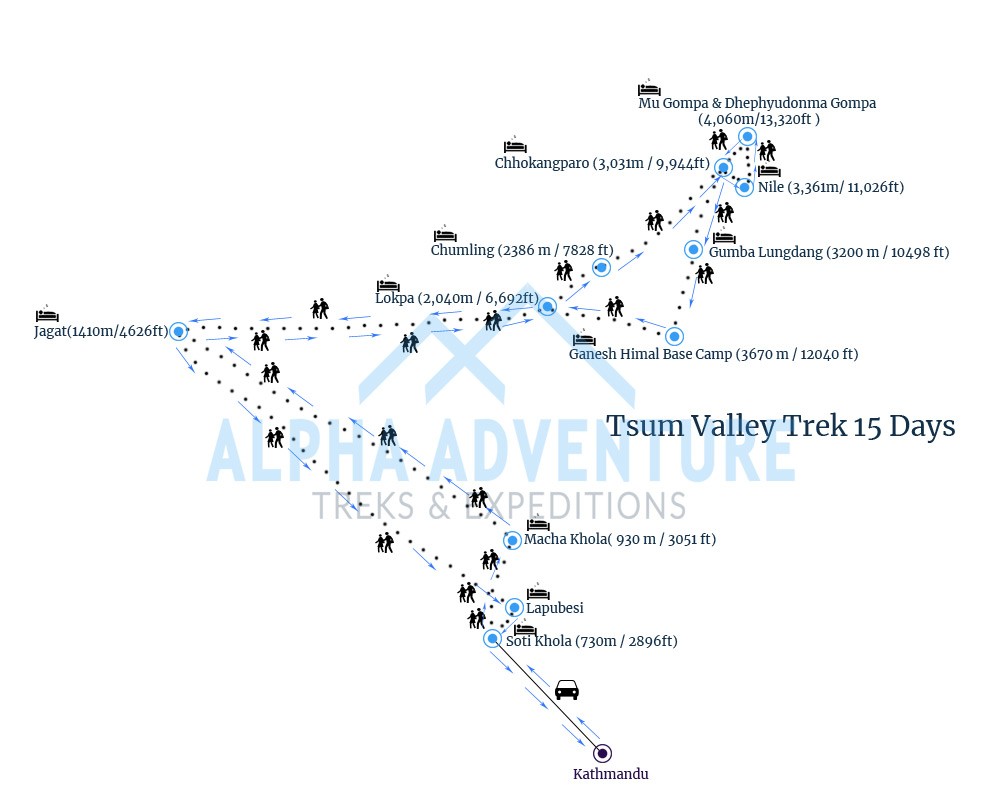 We went on a trek to Manaslu Region last year. The trek to Tsum valley and Ganesh Himal Base Camp was absolutely amazing. Even though the trek was long but it was worth the shot.

Definitely my next time trek company !!

It was my first trip with them going to Manaslu circuit Trek and was really nervous as i was travelling solo. After landing in kathmandu I was amazed with their hospitality and care towards me including the team I was going with, During the trek the guide was very kind and helpful. I am definitely traveling with them on my next trip to Nepal.

My hiking partner and I could not have had a nicer time in Nepal. As we prepared for our trek, Purushottam offered us with good, fast, and precise information, which was especially beneficial as the COVID landscape in Nepal changed. Arriving at the airport was a breeze, as we were greeted by our guide and then met with Purushottam to discuss the walk. Saroj was our guide, and he was a joyful and knowledgeable authority on the trip, having completed it over 50 times. Of course, the mountains on our trek were massive and breathtaking, and we were glad to experience this area before it became overdeveloped. Alpha Adventure Treks made the trip go as smoothly as possible, focusing on making it the once-in-a-lifetime experience we had hoped for.

Please use the below address to call us or mail us 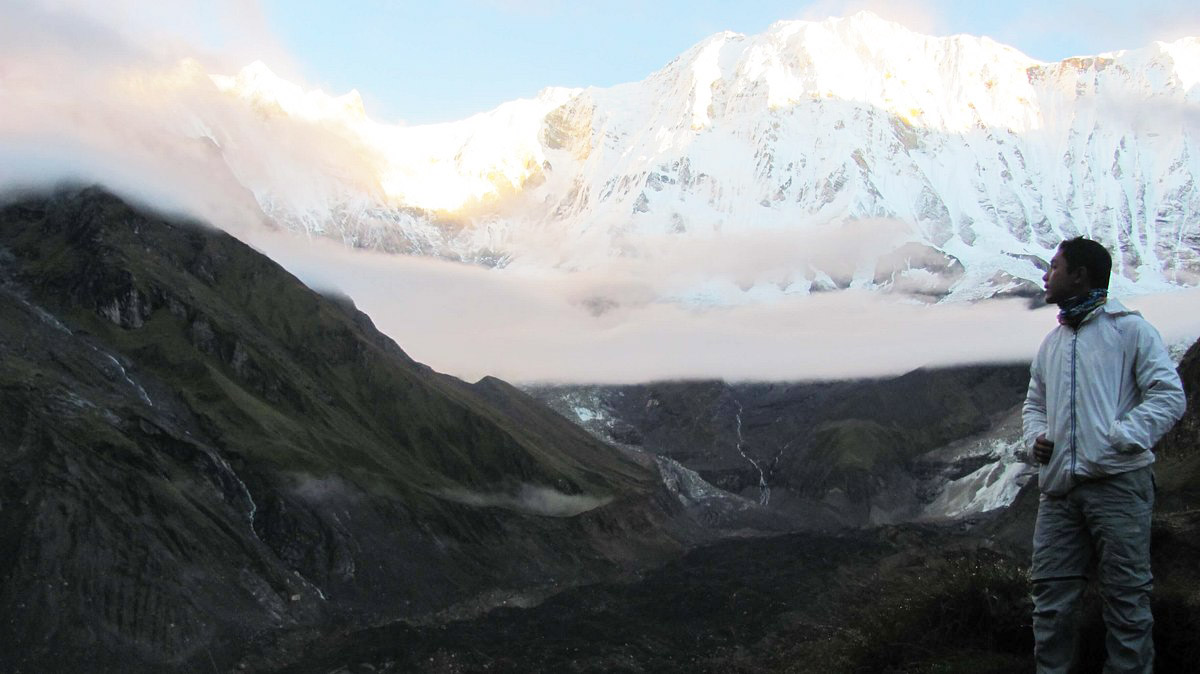 Enjoyed the experience to the fullest.

Went to Annapurna Base Camp and really loved this trek route. The mountains, hills, rivers, locals and livestock are still fresh in my memory. The route from Machapuchre base camp to Annapurna Base Camp was like a dream. And the base camp itself in between the massive Annapurna and Machapuchre was a surreal exprience. Thanks to Alpha Adventure Treks for managing everything with highest professionalism. Didn't have to worry about anything.

It was a really amazing trek to kapuche lake, organized by this company. Everything was great: accommodation, food, etc. Especially worth mentioning purushottam who really helpful to us . He is a professional in his field and also a very cheerful and friendly person. He knows the route very well and is always ready to help. Thank you so much for organizing this trip!